Ideas alone can be works of art; they are in a chain that may eventually find some form. All ideas need not be made physical - Sol le Witt
Posted by Olivia Hicks at 02:07 No comments: 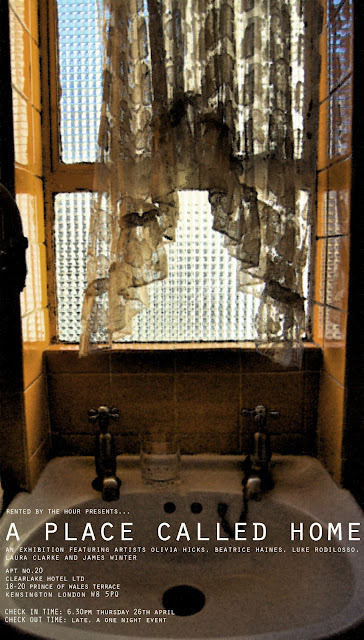 Posted by Olivia Hicks at 13:49 No comments:

Rented by the hour
Clearlake Hotel
Press release
Apartment 20  - A place called home
Following on from Apartment 21 in 2010 the artists Olivia Hicks, Laura Clarke, Beatrice Haines, James Winter and Luke Rodilosso return to Apartment 20 at Clearlake hotel in April 2012 to the floor above for the next Rented by the hour experience. The artists are gradually working their way up the building.
A place called home will be an exploration into how ideas of suspended time can be interpreted in a transient space such as a rented apartment where people regularly pass through. The apartments are not hotel rooms, but a home from home, usually only occupied for a short period by an endless stream of different people, but in this private space at a particular moment in time a multitude of stories can be told, both real and imagined.
Rene Magritte wrote an essay entitled Theatre in the Midst of Life, which portrayed his art as a stage on which the natural laws of time and space ceased to exist. In the spirit of this the artists will produce psychosocial responses to the rooms, but only as a starting point for individual fictional journeys inspired by the architecture, its space and its aura.
The stories and poems written by each artist will include varied themes ranging from visceral obsession, the body becoming the home and the home as a space for ritual practice.
A publication entitled A place called home will accompany this exhibition
A Place called home,
Clearlake Hotel
18 – 19 Prince of Wales Terrace,
Kensington, London W8 5PQ Tube; High St Kensington
Thursday 26th April 2012
Check in time 6.30pm, check out late
A one night event
Posted by Olivia Hicks at 06:50 No comments: